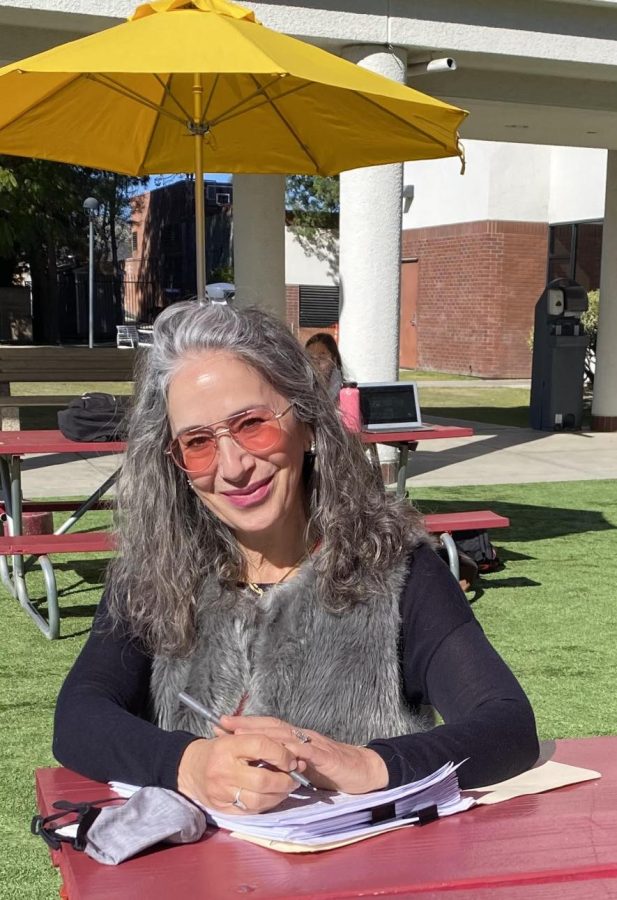 Sarah Golden, the English Department Chair, has been teaching for six years at de Toledo High School, including 9th grade Honors, 11th grade Honors, and college prep English 11. Ms. Golden tells us about her passion for teaching English literature, shares her knowledge on various topics about teaching English in a post-covid world, and expresses some worrisome thoughts about the future of English literature and how she always manages to keep her students engaged and enthusiastic.

How did you know that teaching was your calling?

When I was 11, I had this record that I loved– it was called “Come Dance With Me,” and it was sort of like an instructional dance, kind of like follow along and we’ll give you the moves kind of thing. And I loved it, and I did it all the time, and I remember my mother saying to me, “You could  start a little class of young kids in the neighborhood and teach a little dance class with that record. That would be so fun.” And that seemed like the funnest thing in the world to me because I was one of those kids who would play school, you know, put up the chalkboard, and so I put posters up all over the neighborhood and nobody signed up for the class, and I thought that was a disaster. But I think my mother planted the seed in me that that was something that I would like or be good at.

I’ve never had you as a teacher, but I know that you’re super energetic and bubbly, and that’s what your students love about you. I mean, they gravitate towards your energy. But how do you stay so passionate and energetic all the time, even if you’re maybe having a rough day?

I think that may be just a case of disposition. I’m lucky that I have an energetic, just positive disposition, and I think I inherited it from my parents, who were both very positive and didn’t really allow us to dwell on the negative. And so that’s kind of how I operate in the world, how I see the world. And I think that when I step into the classroom, it’s a kind of utopia where whatever’s happening in the outdoor world doesn’t really come in. Just close the door and we’re in that little moment together.

Well, I love what I teach. I love the idea that language and literature and beautiful writing is instructive. It shows us what’s possible for humans. It shows us the good, the bad and the ugly of humans so that we can always strive. So I get constantly inspired and invigorated by the actual ideas that come into the classroom through that literature, through that language.

So what is one of the most interesting things that has happened in your teaching career?

We did a great project once that I loved because it was interdisciplinary. I worked with students in theater and students in Spanish and we all together with those teachers…worked on translating a play from Spanish to English that had never been translated before. And then we performed the play one night in English and one night in Spanish. And we worked with some students from a school in Mexico to do this collaboration. And the reason I think it was one of the most exciting things in my career is because the students were bringing a genuine passion… [W]e were meeting after school. They were not getting extra credit. They were just super engaged in the project, and I felt like I was collaborating with my students rather than constructing something for them. I usually feel like I’m making up dinner and they’re sitting down and eating the meal. But this is like we were all cooking together.

As a high school teacher, how do you incorporate life lessons into what you’re teaching?

You know, as I get older, I find that happens more and more naturally, that I’ve just lived so much. So I have a lot more experience than my students. It wasn’t always the case, but I think now that I’m approaching my sixth decade…if I have any wisdom, a lot of it comes from reading. I’ve had a lot of experiences in my life, but a lot of my so-called wisdom may come from just becoming a better reader and understanding the vastness of the human condition and so on. Rather than talking about myself or my own life lessons, I would hope that the students can start seeing how the things that we read connect to the world in their own lives.

How do you feel about technology taking over our pen and paper aspect of learning? How do you try to keep that up in the classroom or like, motivate your students?

I don’t do a very good job of that. I wish I did. I don’t think that’s something that I address nearly enough. I think that may have been one of the dangers of my being my age is that I’m not as keyed into what the experience of a teen is in terms of what competes with reading. And I’m still teaching like I was teaching 20 years ago where I just assume that they’ve got a book and they’re going to curl up with a cup of tea and read it. And I forget about all of the distractions. So I think I need to do a better job of really understanding the way that my students approach that problem, that question. It’s a tough one.

Where’s the most interesting place that you’ve taught?

Cartagena, Colombia. I taught in a bilingual school in the Caribbean coast of Colombia and South America, and the school, while it was a fancy private school with a very high tuition, was a new school that was built way out in the country. And so we would take a hot, dusty bus ride out there every morning, about an hour out of the city. Rain storms would come on the tin roof and it was just like thunder. You just had to stop and you couldn’t do anything. It was so loud. One day I went into my classroom and there was a venomous snake in the room and…I was the adult in the room. So I had to get this super venomous snake out with a broom and a dustpan. And those kids were so cute and so much fun. And I loved the way that when they were really angry and emotional, they’d speak in Spanish, and [when] they were getting more sort of contemplative, they’d speak in English, and they just so easily navigated between their two languages, which was super inspiring to me because I thought I was not fluent in Spanish…at that time.  I was there in 1994-1996, and we built [a] time capsule that we were supposed to go and dig up when they graduated, but then I left and lost my map of where the time capsule was buried.

Has COVID caused a shift in curriculum change?

That’s a great question. I think we’re in a constant shift. I think we’re always evaluating and reevaluating how much we need to read, given that students aren’t readers so much, does that mean we do more or less? Go more deeply with fewer texts? Given how busy our students are in a dual curriculum school where we only meet them three or four times a week, we’re constantly reevaluating what’s best. So I think the curriculum does change all the time. I think for me, there’s a little bit of loss in that because I loved it when I was in school and you knew what was coming like, oh, the seniors are reading Blah blah blah. I can’t wait to be a senior when I get to read the book. There is something about the traditions and rituals of repeating that I missed. But I also think it’s really important that we keep addressing books on the ground. Where are we at this moment in our culture and how do we address that? For example, I just had a teacher come to me this morning and say, maybe we should teach “Maus” in ninth grade next year, [the Holocaust graphic novel] which has just been banned in Tennessee.

Are you concerned for the future of some students that don’t read as much or especially like technology?

I am concerned, honestly. I think I don’t know that everybody needs to make it their hobby or pastime to curl up with a book. But I do think the ability to read complex texts directly correlates with your ability to think critically, to sort of see the world as a window and a mirror. Where am I in this text or through the window? Who are other people?

[Reading] develops empathy. It develops the sense of ‘there’s not just me,’ and I think so much of like, you know, this idea that an individual can get rich quick as an influencer. It’s so me, me, me, me, me, me, me and so little contribution to your world and so little understanding of the bigger issues beyond money. So that concerns me. It concerns me that time is so yanking on you all the time. All of these apps are built so that you’ll keep visiting them periodically every day through the day.

And I think that that’s what we are competing with in school, we’re competing with this notion that everything is a quick fix, that everybody can get rich quickly. And what are the deeper, more lasting values when you’re competing with the cheap, quick fix? It’s really challenging. I do have concerns. I read an article yesterday that said that only 14 percent of Americans read above a sixth grade level. Fourteen percent. And that is a little frightening, because it’s time to vote. You need to read your ballot and you need to figure out how this candidate differs from this.

Your parents are, you know, privileging education. But we’re entering a world where the voters and the decision makers I want to innovate and make the world a better place may not have the skills. That’s scary to me.

When some professionals do presentations, they make it a way so an 8th grader can read it…

Exactly. And I think of, you know, during the Lincoln-Douglas debates, there’s a great historical moment where Abraham Lincoln would do a series of traveling around the country and doing these debates where they would invite the whole town to come out and they would stand there and they would debate for six hours, eight hours, and the audience would stay in the audience and listen and follow the arguments. And if you read any of Lincoln’s speeches, you know what a complex writer he was. Nothing was dumbed down, and that’s a little frightening to think that in the 19th century, ordinary people were able to follow complex arguments in a way they may not be able to today.

As the English chair, are there certain articles or things that you wish to see in the school newspaper?

Yes, actually, I wish that the paper could kind of look at what’s the buzz, what are the students talking about? This is what I used to advise the newspaper in my previous school. What I always say to my journalists is, “What is the buzz? What’s the locker talk? What’s going on out there? What are people concerned about? What are people questioning?” I think a newspaper is a place for student voices to really push against the status quo. What’s going on in our school that we love and cherish? But what’s going on in our school that we want to push against? There must be some, you know, we’re such a happy school and everything’s positive, and that’s true. But there must be some whispers around corners.