'Heartbeat Act is an attack on women' 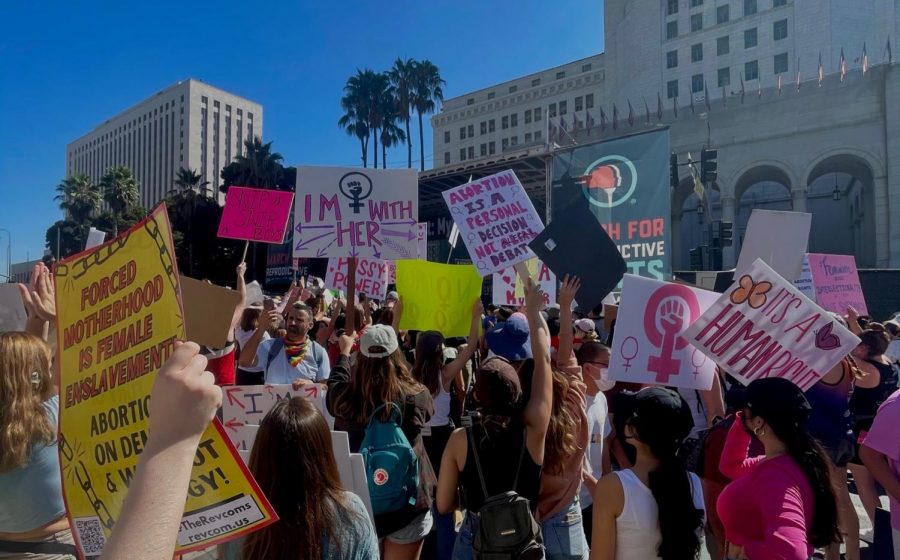 The opinions expressed in this article are the author’s own and do not necessarily represent the views of The Prowler.

As a woman, my rights are in constant question — whether it be of bodily autonomy, paygrade, or scholastic worth.

Though the rights of women in the world, and especially in America, have come a long way, there are times when the roots of sexism sprout their way through the progress we’ve made as a society. It’s our job to acknowledge when sexism inches its way into our lives, and to fight that regression in feminism.

The Texas six-week abortion ban, or the Texas Heartbeat Act, has been swirling around the news recently. You’ve most likely heard about it already, but what is it really, and why is it monumental to the progress, or lack thereof, of women’s rights in America?

Although I will be mainly referring to women as the victims of this law, not everybody who has the capability of becoming pregnant identifies as a woman. They may be transgender, or may not identify as a certain gender at all. The repercussions of this law does not exclude them.

First enacted on May 19, 2021, the Texas abortion ban is different from the multitude of abortion laws that have been passed in other conservative-led states for mainly two reasons:

The legislation is far more severe than other existing abortion laws, banning abortions as soon as a “fetal heartbeat” is detected. The detection of a heartbeat typically begins as early as six weeks of pregnancy, meaning most women won’t even know they are pregnant before it is too late to make a decision about whether they feel ready to have a child or not.

The second and more legal reason that this law is so different from others, is that its enforcement is carried out by ordinary citizens. Texan or not, citizens are allowed to sue doctors, clinics, or even Uber drivers who aid an abortion that violates the six-week ban. Because the actual enforcement of the law is not carried out by an arm of the state, like a local police department, abortion rights supporters cannot take the usual route of resistance through suing their government. No one person, establishment, or state official is to blame for the actual application of the law, creating a loophole.

After months of tribulation, on September 1, 2021, the Texas Heartbeat Act was (not-surprisingly) approved by the conservative majority Supreme Court. In an unsigned 5-4 opinion, SCOTUS allowed the law to go into effect, despite its acknowledgment of the “serious” Constitutional questions the abortion ban brought up.

Though the Biden administration has requested the Court  rethink its decision and instead block the law, with no other way for opponents to sue, and with the Court’s approval behind it, the Texas Heartbeat Act stands strong. And so, the most extreme abortion ban to date since Roe v. Wade exists.

The basis of the Heartbeat Act’s argument is that a sign of a heartbeat is a sign of life, and that life does not deserve to be extinguished.

Without even getting into the fact that the perception of when “life” begins is different for everyone, and shouldn’t be dictated by whatever-person-in-power’s beliefs are, the very science behind the law’s definition of a heartbeat being detected is warped. Just because advanced technology can detect the flutters of electric activity in the cells of an embryo as early as six weeks, doesn’t mean an actual heart has formed, according to  Dr. Michael Cackovic, a fetal medicine specialist at Ohio State’s University’s Wexner Medical Center. A flutter “is not a heartbeat,” merely “neural cells going up and down tubes in an embryo,” says Cackovic in a September  AP article. An embryo isn’t considered a fetus until the eighth week of pregnancy, and a heartbeat  isn’t considered a heart until the 20th week. Cackovic told the AP he thinks people are using advancements in technology “to forward their agendas,” like this six-week ban.

Not only is the scientific argument of this abortion ban questionable, the values behind it are too. When signing the Heartbeat Act into law, Texas Gov. Abbott said, “Our creator endowed us with the right to life,” and yet too many “children lose their right to life every year because of abortion.” His job in Texas was to “work to save those lives,” he said in the Texas Tribune.

If Abbott is so bound on doing “God’s” work through saving these unborn lives, why doesn’t he advocate for better sex education?

Texas has zero mandated sex education. No requirement by law to teach young, impressionable students the importance of contraceptives, sexually transmitted diseases, or the safety of exploring sexual activity. And as for the rare, few schools who actually do teach sex education, Texas law deems it essential that abstinence be emphasized above all else.

How is an uneducated population supposed to not need abortions? How would they know better?

And forget sex education. If your priority is saving lives, why don’t you focus on improving the lives that already exist? Fund homeless shelters, welfare programs, public schools, and the foster care system; increase minimum wages; advocate for mental health awareness; acknowledge racial prejudices in judiciary systems — there are so many things state governments could do to improve the quality of life of those lives that are not unborn.

If you care about life, care about the institutions and legislation that save and help already existing life too.

This abortion ban will not stop abortions from happening, but instead increase the likelihood of an unsafe, life-threatening one taking place instead.  Already about 47,000 women die every year from unsafe abortions, according to the World Health Organization (WHO), so why try and increase that devastating number even more? A  2020 WHO study states that almost every abortion-related death and disability could be “prevented through sexuality education, use of effective contraception, provision of safe, legal induced abortion, and timely care for complications.”

The Texas Heartbeat Act is taking away those very measures that protect women’s health. If the point of the law is to stop abortions, and yet there is compelling research showing laws don’t stop them but rather endanger the safety of women who need them, what does the law accomplish?

Piecing these parts of the puzzle together makes it clear that this law is not about the science of a heartbeat, it’s not about Christian values (regardless of their relevance in a so-called separation of church and state government), and it’s not even about actually stopping abortions from happening — it’s just about controlling women.

The controversy over this law must be seen as more than just normal, polarizing aggression. The Texas Heartbeat Act is an attack on women, and it must be faced with the same intensity it has laid on those it seeks to oppress.